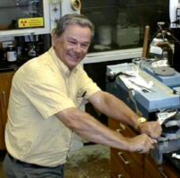 The focus of research in this laboratory is the determination of enzyme mechanisms. The disciplines being employed to achieve this end are transient-state and steady-state kinetics with an emphasis on hydrogen isotope effects including solvent isotope effects. A new tool being developed in this laboratory is the effect of high hydrostatic pressure (e.g., 3,000 atmospheres) on enzymatic catalysis. For example, we recently observed a pressure effect on the deuterium isotope effect arising from hydride transfer during the oxidation of benzyl alcohol by yeast alcohol dehydrogenase. The classical application of absolute rate theory to enzyme kinetics is not consistent with this result and is therefore shown to be inadequate. The volume change associated with the isotope effect is the first measurement of its kind in that it documents a physical property of the transition-state of catalysis. This new probe of transition-state chemistry holds great promise for elucidating the chemical mechanisms of enzymatic catalysis. A class of enzymes that are under study are those which have iso-mechanisms. These enzymes catalyze the chemical conversion of substrates to product by undergoing a reciprocal chemical change themselves. In order to repeat the process and therefore qualify as catalysts, the chemical change in the enzyme must be converted back to the starting form, a process sometimes described as isomerization of free enzyme and which if slow relative to the chemical changes gives rise to an iso-mechanism. Particular attention is presently being given to iso-mechanisms of aspartic proteases which have partially rate-limiting rehydration and reprotonation of the aspartic carboxyl groups in the active site. The significance this research derives from the family of enzymes comprising the aspartic proteases, many of which are clinically significant enzymes, including most notably the HIV protease and renal renin. Similar isotope effects suggest that a rate-limiting reprotonation may be a common feature of the aspartic proteases. If true, then this kinetic mechanism will have an important relevance to the design of inhibitors. These should be designed to bind to the form of enzyme that is present in the greatest concentration in vivo, which ought to be the form of free enzyme that has not yet undergone rehydration and reprotonation.

Background: Dexter received his BA degree (1962) in chemistry from St. Olaf College and his PhD degree (1969) in biochemistry from Case Western Reserve University. For two years he was an American Cancer Society Postdoctoral Research Fellow, first at Harvard University and then at the University of Wisconsin. He joined the faculty of the School of Pharmacy in 1971. Research interest includes enzymology, with an emphasis on kinetics and reaction mechanisms.

Professional Interests: Enzymology, with an emphasis on kinetics and reaction mechanisms