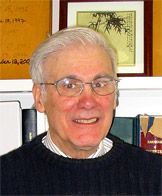 Our research interests are focused in two areas of physical chemistry with potential application to pharmaceutical systems. In the first area, we are interested in the interfacial properties of lipids, proteins and polymers and their use as models of various biological and pharmaceutical interfacial phenomena. In particular, we currently are interested in studying the properties of protein-phospholipid monolayers and bilayers and their relationships to the properties of biological membranes and lung surfactant.

Background: George (Edward Kremers Professor) received his BS degree (1956) from Columbia University and MS (1958) and PhD (1960) degrees in pharmaceutics from the University of Michigan. After serving on the faculties of Columbia University and the University of Michigan and a sabbatical year at the University of Utrecht, he joined the Wisconsin faculty in 1972. From 1975 to 1980 he served as Dean of the School of Pharmacy. His research interests are in interfacial phenomena, including the properties of lipid, protein and polymer monolayers, and the hydration of crystalline and amorphous solids. In 1989 he was elected to the Institute of Medicine of the National Academy of Sciences. He received the Distinguished Pharmaceutical Scientist Award from the American Association of Pharmaceutical Scientists in 1995 and, in 1996, the Volwiler Research Achievement Award from the American Association of Colleges of Pharmacy