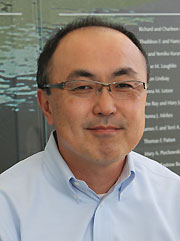 Our pharmaceutical research focuses on polymeric nanotechnology for drug delivery, non-viral gene delivery and optical imaging. Within this context, we are very interested in fundamental pharmaceutical concepts in drug solubilization, controlled release and drug targeting. These insights into polymeric nanotechnology allow us to explore pharmacological strategies that are bio-responsive, synergistic and/or theranostic, aiming for cures against lung, breast and ovarian cancers and systemic fungal diseases.

Before joining UW-Madison, Dr. Kwon was a Japan Society for the Promotion of Science Postdoctoral Fellow at the Institute of Biomedical Engineering at Tokyo Women's Medical College in Tokyo, Japan from 1991 to 1993 and an Assistant Professor in the Faculty of Pharmacy and Pharmaceutical Sciences at the University of Alberta in Edmonton, Canada from 1993 to 1997. Dr. Kwon received the Jorge Heller Journal of Controlled Release/ Controlled Release Society (CRS) Outstanding Paper Award in 1994, American Association of Colleges of Pharmacy Faculty New Investigator Award in 1998, CRS Young Investigator Research Achievement Award in 2003, Fellow of the American Association of Pharmaceutical Scientists in 2012,  Highly-Cited Researcher by Thomson Reuters in the category of Pharmacology Toxicology in 2014, and AAPSPharmSciTech Outstanding Manuscript Award in 2016. Dr. Kwon is co-founder of Co-D Therapeutics Inc., a start-up company dedicated to first-in-class anticancer combination nanomedicines. He is a member of the Developmental Therapeutics Program at the UW Carbone Cancer Center. He is an Associate Editor for J. of Pharmacy and Pharm. Sci and Pharm. Nanotech. He serves on editorial boards of J. Controlled Release, Pharm. Res., Recent Patents and Drug Form., and Mol. Pharm.