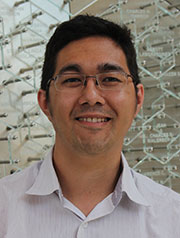 Historically, natural products (small molecules produced by living organisms) have been an important source of drug leads and chemical tools in biology.  The marine environment, in particular, is currently being vigorously explored for natural product discovery because of its unrivalled biodiversity.  Intense competition for space and resources likely contributes to the expression of natural products to gain a competitive advantage.  Microorganisms are especially adept at making natural products, and many form stable associations with higher organisms, which use bacterial products as chemical defenses.  Such symbiotic bacteria are implicated in the production of many natural products that have been isolated from marine invertebrates.  However, it is often the case that little is known about the bacterium that makes a particular natural product in an animal, because of difficulty in culturing such symbionts, and because the animal may harbor a very complex microbiome.

We aim to discover new natural products and their biosynthetic pathways, and to understand the role of natural products in symbiotic relationships.  We tackle these problems using traditional culture-isolation techniques and in a culture-independent way using shotgun metagenomics.  In this way, we can investigate symbiotic relationships through direct sequencing of DNA from the host.  Natural products that are produced in symbiotic relationships that have stood the test of vast evolutionary time are likely to be the most important, both ecologically and as drug candidates.  However, symbionts from such systems are likely to be extremely recalcitrant to culturing efforts, and may be minor components of a complex microbiome.  Metagenomic sequence data allows us to elucidate the biosynthetic pathways of natural products, and it often tells us much about the producing organism.  Understanding how natural products are made allows us to work towards expression of these products in heterologous hosts, potentially allowing us access to these compounds for further study and development.