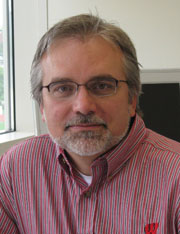 The focus of the laboratory is Molecular Neuropharmacology/Neurodegeneration.  Oxidative stress is believed to be a principal factor in the development of many chronic neurodegenerative diseases such as Alzheimer’s, Parkinson’s, Huntington’s and Amyotrophic Lateral Sclerosis.  The laboratories goal is to discover ways to increase the defense mechanisms in brain by activating multiple antioxidant defense genes simultaneously through activation of the Nrf2-ARE pathway.  Present work in the laboratory is focused on: 1) drug discovery with respect to small molecule activators of the Nrf2-ARE neuroprotective pathway; 2) signaling mechanisms responsible for Nrf2-mediated neuroprotection using proteomics; 3) role of astrocytes in Nrf2-mediated neuroprotection; 4) the role of Nrf2 in microglial activation; and 5) viral-mediated delivery of Nrf2 and/or transplantation of Nrf2 overexpressing progenitor cells into animal models of Alzheimer’s Disease, ALS, Huntington’s Disease and Parkinson’s Disease.

Faculty Director of the Bachelor of Science, Pharmacology-Toxicology Program

Professional Interests: Transcriptional control of neuroprotective genes and prevention of neurodegeneration in Parkinson's, Alzheimer's, Huntington's and neuromuscular disease.  A focus on dysfunctional proteostasis in disease progression and viral-mediated delivery of protective genes to the brain.

Selected from a total of 82 publications.