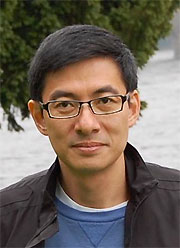 I. [4 + 3] Cycloaddition Chemistry of Allenamides We have been examining extensively the chemistry of allenamides in the last 15 years. We have developed a diverse array of major reactions associated with this new class of allenes and applied to a formal total synthesis of zincophorin. Most significantly, we achieved a tandem epoxidation and oxyallyl cation [4 + 3] cycloaddition using chiral allenamides. The epoxidation of allenamides proves to be an excellent source of chiral, nitrogen stabilized oxyallyl cations. We were able to develop highly regio- and stereoselective inter- and intramolecular oxyallyl cation [4 + 3] cycloadditions. Recently, not only were we able to achieve the first asymmetric [4 + 3] cycloaddition using copper-bisoxazoline systems, but more significantly, in collaboration with Professor Ken Houk at UCLA and Dr. Elizabeth Krenske at University of Melbourne, we are beginning to construct a theoretical model for understanding and predicting regioselectivities of this important cycloaddition.

II. Stereoselective Methods Using Chiral Ynamides In a related but different area, we have developed the chemistry of ynamides as stable equivalents of Ficini's ynamines, which has evolved into a burgeoning field with the followings of many research groups around the world. Our work has rekindled the interest of the synthetic community toward this very interesting class of functional group. 16 Years ago, we placed particular emphasis on developing a highly efficient synthesis of ynamides in order to provide the kind of accessibility that may allow the community to view ynamides as a user-friendly functional group in organic synthesis. Toward this goal, we developed a Cu(II)-catalyzed C-N bond formation involving sp-hybridized carbons. This catalytic amidation provides a direct entry to chiral ynamides via N-alkynylation of amides. Our work and those that followed have had a huge impact on the field, allowing many research groups to freely develop methods of their interest using ynamides as an organic functional group. Recently, we were able to finally succeed in developing an ynamide version of Ficini's thermal [2 + 2] cycloaddition with alpha,beta-unsaturated carbonyl systems.

III. Natural Product Total Syntheses We have developed a bio-inspired [3 + 3]-annulation reaction or formal cycloaddition of vinylogous amides or diketones with alpha,beta-unsaturated iminium salts that can be used to construct heterocycles. The transformation involves a tandem Knoevenagel-6pi-electron electrocyclic hetero ring-closure. This process has allowed us to achieve numerous total syntheses of complex natural products such as arisugacin A, simulenoline, huajiaosimuline, tangutorine, hongoquercin A, perhydrohistrionicotoxin, cylindricines, lepadiformine, the entire lepadin family, the aza-phenylene family, rhododaurichromanic acids, and most recently, phomactin A.

IV. Cyclic Acetal-Tethered Reactions and Natural Product Syntheses Cyclic acetal-tethered intramolecular reactions, specifically intramolecular Diels-Alder [IMDA] and RCM reactions, which are areas that have not been widely studied, are pursued in our lab, as well as approaches to fusidilactone C and spirastrellolide A, spiroketal-containing natural products that first provoked our interest in cyclic acetal-tethered strategies. These investigations are of significance because they can lead to conceptually and fundamentally different approaches to spiroketal-related complex natural products such as our recent success with a total synthesis of aigialospirol.

Richard P. Hsung went to Calvin College in Grand Rapids, MI, for his BS in Chemistry and Mathematics, and worked in Professors Ron Blankespoor and Ken Piers' laboratories. He attended The University of Chicago for his MS and PhD degrees in Organic Chemistry under supervisions of Professors Jeff Winkler and Bill Wulff, respectively. After pursuing post-doctoral research at Chicago with Professor Larry Sita, he completed his training as an NIH post-doctoral fellow with Professor Gilbert Stork at Columbia University. He began his independent career at University of Minnesota–Twin Cities and subsequently moved to University of Wisconsin–Madison. He was the recipient of an NSF Career Development Award and The Camille Dreyfus Teacher-Scholar Award, and served as the Chair of the 57th Gordon Research Conferences on Organic Reactions & Processes. He was a recipient of 2016 Eli Lilly Open Innovation Drug Discovery Award. He is currently the Laura and Edward Kremers Endowed Chair in Natural Products Chemistry and University of Wisconsin–Madison Vilas Distinguished Achievement Professor.  He has co-authored over 275 publications, book chapters, and reviews, delivered over 250 invited lectures, and supervised over 170 students and post-doctoral fellows with research interests in developing cycloaddition and annulation approaches to natural product total syntheses and stereoselective methods using allenamides, ynamides, enamides, and cyclic acetals.