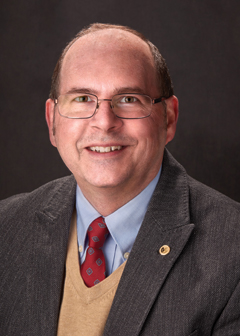 Dr. Elder worked in the pharmaceutical development and drug delivery industry for sixteen (16) years prior to joining the UW School of Pharmacy in 2006.  As Director of the Zeeh Pharmaceutical Experiment Station, he is responsible for providing pharmaceutical and biopharmaceutical R&D support and educational programs for researchers, both on and off campus.  Ed describes his position as "an industrial role in an academic setting".

As a registered pharmacist and experienced pharmaceutical scientist, Dr. Elder holds a key leadership position for the Zeeh Pharmaceutical Experiment Station, providing laboratory services to enable and support pharmaceutical and biotechnology product development across the UW System campuses and for off-campus clients.  The Station is also influential in providing educational programs covering the process and science of drug development, in conjunction with the Division of Pharmacy Professional Development.

Dr. Edmund (Ed) Elder acquired substantial experience in the pharmaceutical and drug delivery industry where he worked for sixteen (16) years prior to his tenure at UW.  He joined the UW School of Pharmacy in April 2006 and assumed his current role as Director of the Zeeh Pharmaceutical Experiment Station in July 2007.  Dr. Elder was granted Affiliate status with the Pharmaceutical Sciences Division in 2014 after previously serving as a Guest Lecturer for seven (7) years.

From August 2000 to April 2006 Ed served as pharmaceutics director and global technical leader in the pharmaceutical growth group at the Dow Chemical Company and transitioned that role into the global product development director for the BioAqueous* Solubilization Services offering from the DowPharma* business unit [*Service Mark of The Dow Chemical Company].  In this capacity he was responsible for managing the technical elements of a drug delivery business based on corporate particle engineering (nanotechnology) capabilities, leading a university collaboration related to the business, and providing pharmaceutics expertise for assessment of emerging business and technology development opportunities in the pharmaceutical and biotechnology sector.

Dr. Elder is currently serving on the 2020-2025 United States Pharmacopeia (USP) Compounding Expert Committee and was also a member of this USP Expert Committee for the 2010-15 & 2015-20 cycles.  He has made scientific presentations at several national and international pharmaceutical industry meetings. He is a member of the Editorial Board for Drug Development and Industrial Pharmacy as well as a reviewer for various prominent journals in the field of pharmaceutical sciences.  Throughout his career in industry, Dr. Elder was active in the AAPS Visiting Scientist Program for Schools of Pharmacy, having visited fourteen (14) colleges and universities from 1994-2006 (including UW-Madison in 2005). Furthermore, he has served as a guest lecturer on various occasions at four additional universities. Dr. Elder is a member of the American Association of Pharmaceutical Scientists (AAPS), Sigma Xi (The Scientific Research Honor Society) and a Life Member of the National Eagle Scout Association (NESA).

Ed serves on the advisory boards for Waisman BioManufacturing and the UW Carbone Cancer Center Drug Development Core.  He served on the UW Academic Staff Mentoring Committee from 2015-2019 including as co-chair from 2017-2019.