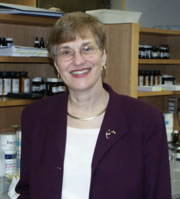 Judith E. Thompson is Clinical Associate Professor-Emeritus at the University of Wisconsin School of Pharmacy. She received her BS in Pharmacy in 1967 from the University of Wisconsin and earned her M.S. in Hospital Pharmacy in 1969 from the University of Texas-Austin, with residencies at Brackenridge City Hospital, Austin, Texas, and University Hospitals, Madison, Wisconsin. She has practiced pharmacy in both community and hospital settings. From 1984 until her retirement in August 2005, she was a full-time teacher at the UW School of Pharmacy with responsibility for the Drug Delivery Systems Laboratories. From July 1996 through June 2004 she also served as Associate Dean for Student Affairs.  Professor Thompson has received 11 awards for teaching excellence from the students at the School of Pharmacy. In April 1995 she was awarded the James R. Underkofler Excellence in Teaching Award, the highest award given in the UW System for teaching excellence.  She is a member of Rho Chi Society, Phi Beta Kappa, Phi Kappa Phi, Phi Lambda Sigma, the Wisconsin Alumni Association, and the Wisconsin Pharmacy Alumni Association. Until her retirement, she was active in the AACP Laboratory Instructors Special Interest Group, serving as Co-Chair of this group in 1995. From 1996 to 2010 she was a member of the United States Pharmacopeia Compounding Pharmacy Expert Committee and served as Vice Chairman of this committee from 2005 to 2010. From 2008 to 2010 she served as Chair of the Compounding Pharmacy Subcommittee on Chapters Review and Maintenance, which produced a major revision to USP Chapter Pharmaceutical Compounding—Nonsterile Preparations. This chapter serves as the primary standard of compounding practice in the US and is updated regularly. In August 1998 she published A Practical Guide to Contemporary Pharmacy Practice, a general textbook for practicing pharmacists and pharmacy students.  The second (2003) and third (2009) editions of this text contain audiovisual demonstrations of compounding procedures on an interactive, multimedia CD-ROM created by Dr. Lawrence Davidow of the University of Kansas. This book has been translated into both Spanish and Portuguese and is used by schools of pharmacy and pharmacy practitioners internationally, as well as by many colleges of pharmacy in the United States. A fourth edition authored by Deborah Lester Elder was published in 2017.

At Professor Thompson’s retirement in 2005, colleagues, former students, and friends established an endowed scholarship, the Judith Fifrick Thompson Scholarship, which is given annually to a UW-Madison School of Pharmacy student. Contributions to this scholarship fund can be made through the UW Foundation. In November 2007 Professor Thompson was awarded a University of Wisconsin-Madison Honorary Citation for her contributions to pharmacy education and practice and to the School of Pharmacy.