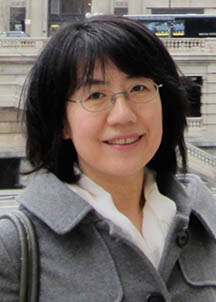 Another focus of our lab is to elucidate the functions and mechanisms of the mitotic kinase haspin in control of cell cycle progression and the antitumor potential of its inhibitors. Post-translational modifications of conserved residues on histone tails regulate many aspects of chromosome activity. We have identified the protein kinase haspin, which is responsible for mitosis specific phosphorylation of histone H3 at Threonine 3 residue. Gene silencing of haspin leads to chromosome misalignment, precious loss of cohesion between sister chromatids, multipolar spindles, and overall mitotic arrest. We are interested in exploring the role of haspin in cancer development and the therapeutic potential of haspin inhibitors in treating different types of skin cancer.

Jun Dai received her B.S. in Biochemistry from Nankai University in Tianjin and obtained her Ph.D. in Anatomy from Tulane University in New Orleans working in the laboratory for Professor Steven M. Hill. She pursued her postdoctoral research first in Division of Rheumatology, Allergy, and Immunology at Brigham Women’s Hospital with Professor Victor W. Hsu and Professor Jonathan M. Higgins, and subsequently at Cutaneous Biology Research Center of Massachusetts General Hospital with Professor G. Paolo Dotto and Professor/Head David E. Fisher. She held a faculty appointment as an instructor in Harvard Medical School between 2005 and 2016, and was a recipient of an NIH K01 Career Development Award.  In 2014, she began her independent career as an Associate Professor of Cell Biology in School of Pharmaceutical Science and Technology at Tianjin University, and in 2017, she moved to University of Wisconsin–Madison.